You are here: Home / Buying Guide / How to Safely Use Pendants for EMF Protection

Although most people are not super-sensitive to the effects of EMFs, they are still harmful to the body. A great and easy way to protect yourself is to get an EMF protection pendent. In this article, I’ll share with you my some popular ones to get and my favorite.

There are a ton of EMF products on the market. Some are scams and some of which are genuine.

It can be hard to figure out what is real and what is not.

EMF pendants and necklaces work as protection from EMFs. While no pendent will completely block or absorb all EMF radiation, they may be able to help lower the effects of the problem. You can also use negative ion bracelets if that more your thing.

EMF pendants have the ability reduce the radiation generated by EMFs.

This process is known as attenuation.

Attenuation is defined as a reduction of intensity as a force passes through something. As an example, fog attenuates sunlight, lead vests attenuate X-rays and earplugs attenuate the sound entering your ears.

Certain materials have the ability to block EMF radiation. These materials protect from EMFs by diffusing and scattering the radiation as it comes in contact with the material.

While it does not make sense to wrap yourself up in a mylar or aluminum sheet to avoid EMFs, you can help provide a measure of protection by wearing an EMF pendent. I will discuss some of them below.

What is Orgonite and How Does it Work Against EMFs

Orgonite is created by combining resin, certain metals and quartz to create a unique pendent with the ability to promote harmony with the body’s systems.

In the early 1900s, a psychiatrist by the mane of Dr. Wilhelm Reich decided to research orgonite. Today’s orgonite creations are based on his findings. Dr. Reich found that organic materials attract and hold orgone energy, while non-organic metals both attract and repel the energy at the same time, creating a stabilizing effect on energy fields.

Orgonite is made from a 50-50 mix of resin as the organic factor and is derived from petrochemicals found in the earth.

Metal shavings are added to the mix along with quartz, which gives off an electrical charge when placed under pressure. That is why quartz is used in the manufacture of analog watches as the “motor” that keeps the watch ticking.

The cured resin places pressure on the in quartz, resulting in a microcharge of electricity.

Because the elements contain in orgonite are constantly attracting and repelling energy, they create a cleansing and balancing action in the fields of energy within their range.

This cleansing combined with the charge given off by the quartz, helps diffuse stagnate or negative energy, thereby restoring the body to a natural harmonic state.

Orgonite benefits will vary from person to person. Some people feel the energy immediately upon wearing the pendent while others notice a difference after a period of time. Commonly reports effects of orgonite pendants include:

Some people have also used it to deepen their ability to meditate, boost plant growth, remove negative energy and to strengthen intentions and visualizations.

The psychiatrist who discovered the healing properties of orgone energy believed that he tapped into a cosmic life energy that was too subtle to be measured by any instrument in today’s technology.

This life force is present in everything that exists and is the “glue” that holds everything together. According to Dr. Reich, orgone energy has the following properties:

Orgone is either defined as positive orgone (POR) or deadly orgone (DOR). In Feng Shui traditions, DOR is also referred to as “stagnant qi.” Places that have never ben polluted are charged with this balanced energy that harmonizes and soothes.

This energy can be found near waterfalls, on mountaintops and in vibrant green forests. Deadly orgone energy is usually caused by the modern technologies that harm the human body and the planet.

Cell towers and microwaves are a few of these things that create deadly orgone energy. Being surrounded by chronic DOR can lead to poor health and chronic conditions.

Check out this orgonite pendent as a way to protect yourself from EMFs.

What is Black Tourmaline?

Black tourmaline is known for its piezoelectric and pyroelectric properties.

Piezoelectric means that black tourmaline has the ability to produce an electrical current when placed under stress. This property was discovered in quartz by the Curie brothers, Jacques and Pierre (Pierre later became the husband of Marie, who took his name of Curie).

The brothers found that by wiring a quartz crystal to a recording meter and striking it, they could produce an electrical signal. To be technically correct, crystals do not “make” electricity, despite the fact that they are often referred to as electrical generators.

However, they do serve as transducers. Transducers have the ability to transform one form of energy in to another form. Crystals work by transducing mechanically produced energy into electricity and vice versa.

Black tourmaline’s pyroelectrical properties are similar to its piezoelectric abilities in that it can transduce energy from being heated or cooled.

In order for this attribute to be activated in black tourmaline, it needs to be heated uniformly to create a polarized electrical charge. When polarization occurs, electrical potential known as static electricity occurs.

This property of tourmaline was first discovered in the 1700s when they were used to remove ash from tobacco pipes. When heated, the tourmaline would attract and repel the hot ashes similar to a magnet.

Tourmaline can also attract paper, dust and straw particles. Amber has similar properties and can do the same thing. This is why tourmaline is commonly used in the manufacture of hair straighteners and curling irons. 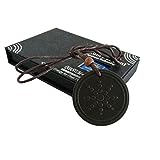 The black tourmaline pendent from Amazon is made from Japanese volcanic lava tourmaline, a unique formula containing aluminum, potassium and iron, among others.

This pendant strengthens the natural energy field of the body by decreasing the effects of radiation on the system. Some people also say that it boosts self-esteem, cleanses negative energy and has a calming effect on the system. This pendent can help with the following:

Tourmaline is unique among energy field stones in that it can contain both positive and negative ions. In the 1800s, tourmaline underwent a battery of tests to determine this unique property.

Unlike quartz, which can only function as a transducer for electricity, tourmaline actually does generate an independent electrical field. Even when cut into small pieces, tourmaline was discovered to have these same properties and to promote the release of alpha brain waves in the 1980s.

For this reason, tourmaline is considered by many to be one of the most effective EMF protective agents in the world. Rather than block or absorb the radiation, this crystal works by supporting the body’s natural electrical field to give it the support needed to create its own defense from radiation.

This stone is used in healing practices by many cultures around the world. This pendent is a stylish way to get your energy field protected without looking odd.

How Does Shungite Protect Against EMF Radiation

Shungite is a plain looking stone that does not have any visible desirable properties. However, shungite among the most effective materials for EMF protection. I

t is speculated that shungite may not even be native to Earth but that it might have come from a meteorite. We are constantly surrounded by EMF-emitting technology in the modern world. The list can go on and on, but the bottom line is that these man-made EMFs are harmful to our bodies and have many negative effects on out systems.

Shungite has the ability to absorb and neutralize the harmful radio frequencies and is the only natural material known to contain hollow carbon “cages” within its structure.

These “cages,” known as fullerenes, allow it to neutralize the effects of EMFs and were discovered in 1996 by a group of scientists who won a Nobel Prize for their work. Fullerenes are arranged in patterns shaped like pentagons and hexagons to form a sphere.

Unlike many other antioxidants, shungite has the ability to magnetize, neutralize and destroy free radicals while maintaining its integrity. As a result, it is an excellent antiseptic, purifying agent and EMF absorber.

Shungite is found only in a certain area of Russian, a small village called Shunga that is located in Karelia, Russia. Shungite can be placed next to your phone outlets or in rooms containing lots of electronics.

You can also wear shungite as a pendent to help protect your body from the harmful effects of the omnipresent radiation in the air today.

The stone has the unique ability to both absorb and adsorb substances.

Absorption takes place when energy, liquid or other substance is soaked up gradually by either a chemical or physical reaction.

Adsorption takes place when an extremely thin layer of a substance (liquid, gas, etc.) is attracted to and adheres to the solid surface of the adsorbing agent. Activated charcoal works in this way, making it an excellent home remedy for food poisoning and upset digestion by trapping the harmful substances on its surface and carrying them safely from the body.

Shungite has the ability the adsorb up to 95 percent of a contaminant and can water that has been tainted by oil. This shungite pendent is a great way to protect your body from the harmful effects of EMFs.

The main biological effect of EMFs is the generation of heat. This is the reason why microwave ovens are able to heat up food. The levels of radio frequencies that the average person is exposed to in the course of a day are significantly lower than those required to produce a significant level of heat.

Although the body is designed to handle a certain level of EMFs, the addition of new, stronger fields can lead to irreversible damage to the body. Over the past 30 years, approximately 25,000 articles have been written that discuss the effects of radiation on the human body and its effects on biological systems.

Symptoms of chronic exposure to EMFs range from anything from headaches, anxiety, depression, fatigue, loss of libido and nausea. These artificial EMFs can also affect you sleep cycles, stress levels, immune function and how well your DNA repairs and maintains itself.

Exposure from power lines, electrical appliances, WiFi and cellphones has been linked to potential health problems in children and adults. Several studies have been performed to examine the possible connection between high exposure to magnetic fields by either parent before conception and by the mother during pregnancy.

The results have been inconsistent and require more evaluation before they are conclusive. However, more conservative views state that excessive use of these EMF-emitting devices can wreak havoc on the body. Some people are able to detect the presents of EMFs at a certain strength and have reported headaches, nausea, joint pain, skin tingling and other symptoms.

Although EMFs are a constant part of the modern lifestyle, it is possible to still live a full life. To help protect your health and the health of your family, I recommend these pendants to you and to anyone who is looking for ways to better their health naturally.

This site uses Akismet to reduce spam. Learn how your comment data is processed.